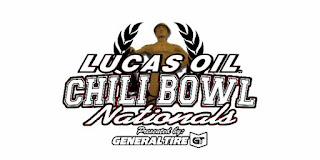 Friday night was Vacuworx night at the 32nd annual Chili Bowl Nationals in Tulsa Oklahoma. Coming into the night the Keith Kunz Motorsports (KKM) team was undefeated with three straight preliminary night wins for Kyle Larson, Rico Abreu and Christopher Bell.
The KKM team fell one spot short on  Friday night as Justin Grant driving for the Clauson-Marshall team won the 25-lap with Spencer Bayston the reigning USAC midget driving champion finishing second ahead of POWRi regular Andrew Felker who started the race from eleventh place. NASCAR Monster Energy Cup series star Kasey Kahne finished fifth.
Felker has quite a comeback story at the 2018 Chili Bowl as he crashed his car in practice on Monday after less then a lap of practice and it required complete disassembly before the frame was straightened, then the car was rebuilt.


Grant who reigned as the 2007 Bay Cities Racing Association (BCRA) season champion continued another trend for the week as he earlier won his heat race and qualifying race, along with other strong contenders Chad Boat, Alex Schutte, Dave Darland and Damion Gardner, who finished fourth in the night’s A feature. Boat led the first four laps of the feature yielding to Gardner who led until lap turn two of lap seventeen when Grant took the lead with an outside pass in turn two.
The Chili Bowl Nationals winds up tonight with the 55-lap feature race.
Posted by Kevin Triplett at 10:00 AM

Kevin Triplett
The webmaster is Kevin Triplett an automotive racing historian and writer living in Walnut Creek California. Mr. Triplett was born into a racing family; his great-uncle was Ernie Triplett, the 1931 and 1932 AAA Pacific Southwest champion and 5-time Indianapolis 500 starter. Mr. Triplett serves on both the National Midget Auto Racing Hall of Fame (NMARHOF) induction committee and on the board of the NMARHOF. He also serves as a member the National Sprint Car Hall of Fame (NSCHOF) induction committee. Mr. Triplett's articles have appeared in print in The Alternate, the Classic Racing Times and National Speed Sport News. Mr. Triplett has been honored with of the 2017 Parsons Performance Award and the 2017 Lloyd Nygren Sportsmanship Award. Mr. Triplett is the writer and editor of Kevin Triplett's Auto Racing History https://triplettracehistory.blogspot.com/ Triplett's Eye on Cars http://TriplettsEyeonCars and also serves as the editor for The Checkered Past, the journal of U.S. auto racing history, an online collaborative journal for publication of articles by fellow racing historians. http://thecheckeredpast.blogspot.com/